On a fall afternoon in Phoenix, Arizona, a professional CertiPro Fire Safety Technician arrived at a commercial building. False water-flow alarms were being sounded, but oddly, no water was flowing through the sprinkler system.

At the same time, down the road, there was construction site. A plastic sleeve from the job site had broken off and fallen into the underground water line. When the line was pressurized for construction, a piece of that plastic sleeve got stuck in the Riser Check Valve.

What is a Check Valve and Where is it located?

The Riser Check Valve (A.K.A Backflow preventer) is a valve that prevents water from flowing out of the fire sprinkler system, once it has entered. It can be found in the Riser room of most commercial buildings.

Joseph, the Technician, tells us to “…imagine it like a one way street, so it allows water to flow in, but if it tries to go back the other way it shuts closed.” Check valves for fire protection prevent this unwanted reverse flow of water, known as Backflow, from occurring.

How did the object trigger the false alarm?

As an example, let’s say a fire department is opening up hydrants and using a lot of water from the city line to put out a fire a few blocks away from your commercial building. When this happens, pressure in your fire system is higher than the city water line pressure, causing a reverse flow of water that is usually halted by the Check Valve.

The Check Valve is there to keep water pressure stable within the sprinkler system pipes at all time. The city water line pressurizes water to the fire system. Joseph states the role of the Valve, explaining that “…if there is a break in the city line, the sprinkler system won’t lose its initial pressure. It also eliminates false alarms from water fluctuation.”

When Joseph took the Fire Riser apart (Fire sprinkler risers are where the plumbing outside a building ends and a fire sprinkler system begins), and found that the foreign sleeve was blocking the Check Valve, he knew that the Valve was now susceptible to water fluctuations.

If the Check Valve is not able to close when water pressure fluctuates in the fire system, then the Flow Switch paddle will sense water flowing out of the system. When water flows in and out of the Check Valve because of pressure changes, it triggers the flow switch, which is the piece responsible for triggering the false alarms.

In order for CertiPro’s Technician to fully inspect the Check Valve, he was required to take the Riser apart. When he began taking it apart, he noticed the lip on the piping was almost completely eaten away by MIC ( Microbiologically influenced corrosion). On top of that, he needed a new Check Valve because the hinged Valve Clapper had a gap in it, and would not close tightly. 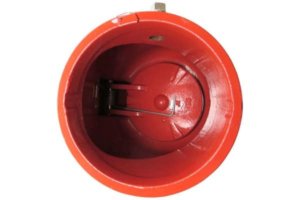 Many check valves feature a hinged clapper with a spring. This keeps the valve closed until water flowing from some water source opens it. These clappers only open in one direction, so when these flows reverse, the clapper forms a water-tight seal.

In order for the Joseph, the CertiPro Technician, to inspect, test, and replace the Check Valve, he needed to shut off water from the Control valve by closing it. Control Valves control the flow of water in an automatic fire sprinkler system. It is critical they usually remain open to allow water flow to the sprinklers.

The Control Valve needed to be closed, because according to the NFPA 25, section A.13.4.1.2, the system should be drained for internal inspection of valve components as follows:

(1) Close the control valve.
(2) Open the main drain valve.
(3) Open the inspector’s test valve.
(4) Wait for the sound of draining water to cease and for all gauges to indicate 0 psi (0 bar) before removing the hand-hole cover or dismantling any component.

Unfortunately, upon inspection, the Control Valve was not shutting down all the way. Now, Joseph had to replace the Control Valve, as well as the section of piping that was eaten away by MIC  (Microbiologically influenced corrosion). That’s when he knew he needed to basically rebuild the entire Fire Riser.

Arizona Commercial Properties are at a high risk

Joseph noted that Commercial properties need this type of work done more frequently because they use Risers in their buildings and because Arizona has exceptionally low water quality. Commercial properties in Arizona’s Phoenix -Metro have high rates of MIC and mineral build-up in the fire system pipes.

Joseph describes pipe build up and MIC as “silent killers” in the industry. Making matters worse, lies the fact that “Arizona water is so bad that there really is no avoiding it.”

Corrosion that eats the pipe away is one of the main causes of defects in sprinkler system piping. It causes pinhole leaks, like the corroded Riser pipe lip – mentioned earlier.

Know when to be concerned

Alarm check valves and system riser check valves require more frequent inspections. Regular inspections help to verify that the clapper functions properly and that the valve seat is in good condition. They also ensure that there aren’t any visible signs of corrosion or blockages.

TheNFPA 25 requires the inspection of alarm and check valves’ internal components every five years. This is called a 5 Year Internal Check Valve and Pipe Obstruction Inspection.

This service can be provided by a certified and trained fire and life safety professional. It basically checks that your building’s fire system piping is clear of MIC and mineral build up.

Not sure if your fire sprinkler system is due for a 5-Year Internal Inspection?

Have a CertiPro Fire & Life Safety professional conduct a test on your current sprinkler system or request a free estimate on the ideal system for your property, connect with us at this link or give us a call today at (480) 829-7600.